Do not “Rejoice with Iniquity!”

Posted on 11. September 2019 by christenfindenruhe

Photo by Skitterphoto on Pexels.com

“They eat up the sin of my people, and they set their heart on their iniquity.” (Hosea 4:8/KJV)

The prophet here is referring to the priests of the Israelites in his time. Sadly these priests did not teach the people God’s truth. They did not help them avoid sinning against God’s commandments.

Although the shrines of the Israelites, i.e. in the Northern kingdom, were kind of idolatrous at the time, the priests still could have exercised some moral authority. Yet they did not do that.

God holds the priests (at least partly) responsible for the sins of the people. The amount of lying, stealing, killings and committing adulteries would not be the same had the priests done a better job.

Yet obviously these were priests who took advantage of the situation. They did their part to lead the people further away from the knowledge of the God of Israel.

It is quite possible that some Israelites would bring sin offerings to the shrine seeking to be released from guilt. According to the Mosaic Law priests were allowed to eat of some of the sin offerings. This gave the priests an (additional) opportunity to fill their stomachs with meat.

Obviously these priests were taking advantage of the sins of the people. Hosea is blaming them for that.

The Calling of New Testament Believers

New Testament believers are referred to as a “royal priesthood” (cf. 1 Peter 2:9). God wants us to pray and intercede for the people around us.

Jesus said: “You are the salt of the earth. But if the salt loses its saltiness, how can it be made salty again? It is no longer good for anything, except to be thrown out and trampled by men.” (Matthew 5:13/NIV).

Jesus wanted believers to be a good example of how to live. Looking at them people should be able to get an idea of godliness and good works.

“You are the light of the world A city on a hill cannot be hidden. Neither do people light a lamp and put it under a bowl. Instead they put it on a stand and it gives light to everyone in the house. In the same way let your light shine before them, that they may see your good deeds and praise your Father in heaven.” (Matthew 5:14+15/NIV).

Christians ought not to point others into the wrong direction. We must not set up any system that allows us take advantage of the sins of other people.

We are to do our part in lovingly telling others about God’s commandments, His love and His grace. We are to help them receive forgiveness from God and learn to live a godly life.

Looking at our lives people ought to be able to get some kind of idea of the practical outworking of the ethical standards of the bible. The church is called to speak up for truth, for righteousness and for justice. 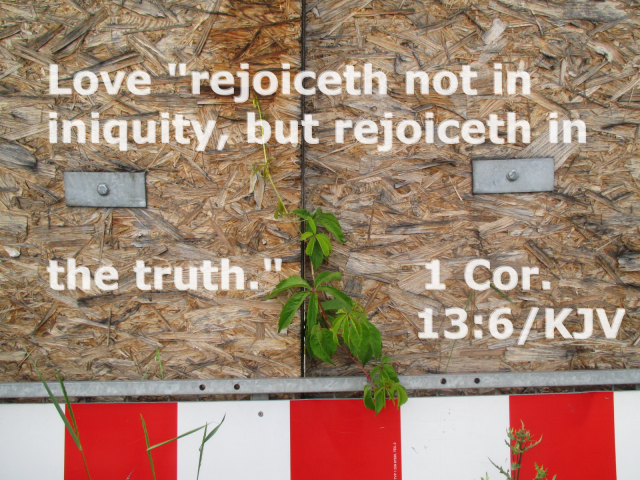 4 Responses to Do not “Rejoice with Iniquity!”